Fort Jackson Basic Training: What You Need to Know

Welcome to the largest TRADOC (Training and Doctrine Command) post in the entire Army!

Basic combat training, often referred to as just basic or BCT, is the introduction those wanting to serve as soldiers receive as they enter the Army. It is life-changing and something that you always will remember and look back on.

Where is Fort Jackson Basic Training?

Fort Jackson is in Columbia, South Carolina, and is the U.S. Army 's main training center for Basic Combat Training.

Our drill sergeants train 50% of the Army's Basic Combat Training trainees, and at least 60% of all females enter the Army every year. Fort Jackson makes sure new soldiers are well-trained, disciplined, motivated and physically fit warriors who can live as prime examples of the Army's core values. You will need to get used to these values, too, and start memorizing them: Loyalty, Duty, Respect, Selfless Service, Honor, Integrity and Personal Courage. Just use the acronym LDRSHIP (leadership) to help you remember! 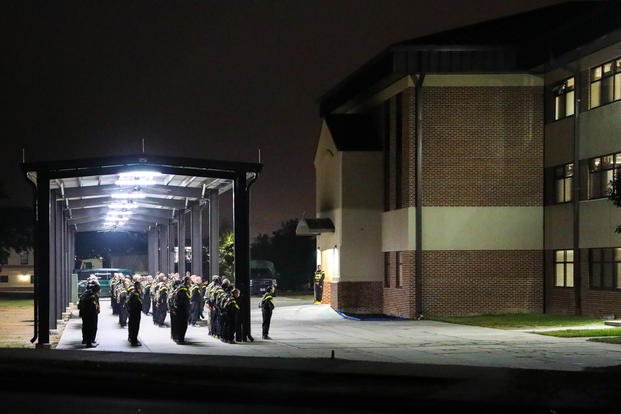 What Units Are at Fort Jackson?

It's time to get excited about all the amazing things you're going to learn at Fort Jackson basic training. Remember, it won't be easy, but it will be worth it.

How Long Is Army Basic Training?

Basic training at Fort Jackson takes 10 weeks to complete. Unlike high school or college, where you may have been in class and studying around six hours a day, the Army trains for about 12-14 hours a day, six days a week.

You'll come to love Sundays, unless you've managed to "earn" some extra-duty time during the week. There isn't a whole lot of sitting in classrooms, either.

While we can't reveal too many secrets (because where would the fun be in that?), we can give you an idea of what happens in BCT.

You are a brand-new trainee in a new, kind of scary environment. It might even be your first time away from home. Zero week is called reception, where all trainees complete administrative actions required to become a part of the Army.

Simple things such as medical examinations, setting up pay and initial issue of equipment are all part of zero week. You'll get assigned to a company, platoon and infantry battalion (there are 11 battalions) in either the 165th Infantry Brigade or the 193rd Infantry Brigade.

Training officially begins. You'll get to meet the drill sergeants who will be with you for the remainder of basic. This can be a tough time for trainees due to the adjustments, but when you look back later, this phase was easy! Most classroom-type training occurs during your first three weeks, you'll learn about:

This phase is sometimes called the rifleman phase, qualification phase or shoot phase. Your focus now -- how to identify, track, target and effectively engage targets with a rifle. This is called marksmanship.

Since marksmanship training is progressive, it will get harder and harder as you move through the phases. You'll learn a variety of things about firearms, such as:

If you make it this far, you're almost there! Now you will be given opportunities to combine all of the skills you have learned in earlier phases of training to complete advanced combat tasks. But there is still a lot to learn:

The final week of basic training at Fort Jackson is all about you and your family. After completing the final training events, which include a week of field training and a 15km march in 'full battle rattle,' you'll finally get to spend the day with family and friends on Family Day.

The next day, your loved ones can watch you graduate Basic Combat Training and become soldiers in the greatest military institution in the world: the U.S. Army!

The day after graduation, new soldiers head to the next phase of their training -- Advanced Individual Training (AIT) -- to learn their military occupation.

Read the original article on Sandboxx.​

We can put you in touch with recruiters from the different military branches. Learn about the benefits of serving your country, paying for school, military career paths and more: sign up now and hear from a recruiter near you.

Military Photos of the Week: Killer Saxophone, Bird Bath, Marines Have Fun at the Beach

The Army has swiftly reversed a new policy that would have allowed potential recruits to enlist into the force without a high...

Prosecutors say Thomas Develin planned to make the guns, which are meant to be untraceable and are built using 3D printers...

This Soldier and Explorer Expanded the Nation's Horizons During His Brief, Brilliant Life

Many people recognize the significance of the names "Lewis and Clark," but fewer know that Army Capt. Meriwether Lewis'...

Get the Military Insider Newsletter

Get the scoop on discounts and latest award-winning military content. Right in your inbox.

By signing up, you agree to our Privacy Notice.
Thank you for subscribing!

Verify your free subscription by following the instructions in the email sent to:

The Naval Sea Cadet Corps was established in 1962 and looks "to build leaders of character" through military instruction and...

'Keep It Gucci:' The Precise Art of Being an Air Force In-Flight Refueler

In-flight refuelers, also known as boom operators, can pump more than tens of thousands of pounds of gas at a time.

'I Cannot Believe I Just Did That': What Goes on at West Point Cadet Summer Training

Summer is not a restful period at West Point. Every class there is involved in some exercises during Cadet Summer Training.

Admissions liaison officers act as a mentor, sounding board and guiding light rolled into one, and every service academy...

Turkey agreed Tuesday to lift its opposition to Sweden and Finland joining NATO, a breakthrough in an impasse clouding...

The First Lady of the United States Jill Biden and Spain's Queen Letizia visited a welcome centre for Ukrainian...

A drone strike by the U.S.-led coalition in northwestern Syria killed a senior member of an al-Qaida-linked group, Syrian...

Hundreds of rescue and emergency service workers continued to scour the rubble, searching for survivors at a wrecked mall...